If you say you are a fiscal conservative and are registered as anything other than Libertarian, you are a fraud.

Let’s look at the budget for the U.S. government. A big part of that budget is the so-called “non-discretionary spending,” which has already been promised, approved, and appropriated. I want to expose these so-called fiscal conservatives by focusing on the discretionary piece of federal spending. This is the area where spending can be reduced immediately, if only our representatives have the will to do so. 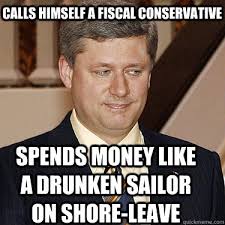 According to the Office of Management and Budget, the drunken sailors in DC had 1.1 trillion to play politics with in 2015. 600 billion of that 1.1 trillion, or 54% of the booty, went to the military.

I will use Wikipedia’s definition of the term Fiscal Conservatism:

My favorite part of this definition is “the reduction of overall government spending…”. Rewind to the 2013 budget talks when Democratic big spender Elizabeth Warren was sitting on one side of the t able and Paul Ryan was sitting on the other side. Paul Ryan was labeled then, and still is today, as a fiscal conservative. The only area that the Dems put on the table for reduction was the military. So Ryan did what any good “fiscal conservative” Republican would do when he saw an opportunity to reduce spending a little: he increased it. 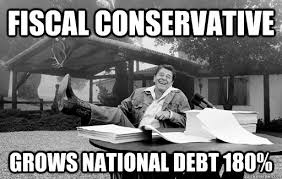 What these fraudulent fiscal conservatives do is refuse to reduce the biggest part of the discretionary budget. Remember this: the “fiscally conservative” Republicans today control both houses of Congress and the White House. There is nothing that can stop them from fulfilling their promises. They promised to cut spending, over and over again. And that is where they are lying to you. You cannot be fiscally conservative and refuse to reduce the area where the most is being spent.

If you are registered as, or vote for, either one of the Old Parties, you, too, cannot claim to be a fiscal conservative. Only Libertarians can proudly step forward and say they are fiscal conservatives. The Libertarian Party is the only party that truly believes that all areas of the federal government can, at a bare minimum, be reduced in size and scope, and that includes the military. A true fiscal conservative has no favorites, no pet projects or sectors, that it refuses to reduce.

Most of the inmates in our fraud jail have a Republican membership card in their pocket and a “Hello” sticker on their lapels that says, “fiscal conservative.”  There are only two things they can do that will get them out of that clink: stop claiming to be a fiscal conservative, or register Libertarian.

by Michael Smith – Secretary of the Libertarian Party of Broward County